Given the increased risk of suicide among family members bereaved by suicide, this section will cover screening and treating suicide risk in the suicide bereaved.

Asking a person whether they have experienced suicidal ideation or behaviour can be difficult. A GP may be worried that this question may prompt suicidal ideation, may affect rapport with the patient, or result in a disclosure that is complicated to manage.

On the contrary, there is strong evidence from a systematic review (Dazzi et al., 2014) that asking about suicidal ideation does not render a person more likely to experience ideation, and indeed reduces feelings of distress at follow-up. This suggests that asking a patient about suicidal ideation or behaviour will not prompt suicidal ideation or increase distress, but rather creates a valuable opportunity to intervene with people at risk of translating suicidal ideation into action. Of course, suicide bereaved patients may have an additional resistance to disclosing ideation, given the effect of the aftermath of their family member’s death. However, the GP can reassure the patient that this is the very reason why these issues should be discussed.

Given the research evidence that asking about suicidal ideation is safe and necessary, the next issue is how to actually initiate this discussion. Some patients may spontaneously speak about death wishes, fleeting suicidal ideation, or a suicide plan. Others may make opaque references, such as ‘if I’m still around’ or others being ‘better off without me’. Some patients may not express ideation but rather manifest hopelessness (perceiving themselves as intractably trapped), low mood, insomnia, or a desire for medication change. A GP can initiate the discussion, asking whether the patient has had any thoughts of harming themselves in this difficult situation. With any allusion to death or suicide by the patient, the GP can probe further, asking about the frequency and intensity of these thoughts, whether the person has a certain plan of what they would do, and whether they have done anything already to enact suicidal behaviour. Previous suicide attempts are one of the strongest predictors of future suicidal behaviour, and previously engaging in high lethality attempts (such as attempted hanging) confers high risk of death by suicide in the future. Other preparations for suicide may include preparations for the act itself (researching methods, stockpiling medications, or procuring a weapon or ligature) or preparations for death (such as writing a will or suicide note, saying farewell, or making arrangements).

If a patient has a concrete plan, cannot distance themselves from their suicidal ideation, or have put preparations in place, they may be at imminent risk of suicide. This should be treated as a medical emergency and psychiatric admission should be seriously considered for the duration of the crisis. Even though a recent suicide in a GP practice might make a GP feel as if suicide is impossibly difficult to predict and prevent, the majority of people who are kept safe and survive a suicidal crisis do not go on to die by suicide.

Sometimes, a patient’s risk might be high but not imminent: where ideation is less prominent but the patient has other risk factors (previous suicidal behaviour, lack of social support, worsening psychiatric illness or substances abuse, male gender, or few protective factors such as positive future plans). Arrangements should be made for psychosocial or pharmacological treatment with short follow-up periods.

Ideation about suicide and death is not uncommon among bereaved family members, especially when the bereavement is due to suicide. Unfortunately, this higher rate of ideation is mirrored by an increased risk of suicide in this group. The next section will outline effective treatments for patients at risk of suicide.

Conversation with a GP: Responding to people at risk of suicide and self-harm

This video with Professor Colin Bradley, Head of the Department of General Practice University College Cork, provides advice on how to approach a person at risk, how to ascertain risk and the screening tools available to GPs.

This video with  Professor Colin Bradley, Head of the Department of General Practice University College Cork, describes the key messages that GPs should relay to people who are vulnerable to or  experiencing depression and suicidal ideation.

For clients with Borderline Personality Disorder, Dialectical Behaviour Therapy is an effective in reducing suicidal ideation, self-harm and suicide. DBT reduces the frequency of self-harming behaviour in Emotionally Unstable Personality Disorder but not the likelihood of suicidal behaviour occurring compared to standard care. It is an intensive intervention delivered by clinical psychologists and is now widely available through mental health services in Ireland. However, it must be noted that not all people who engage in self-harm are suitable for CBT.

There is also good evidence for the effectiveness of cognitive-behavioural therapy in preventing future self-harm. A CBT intervention designed to address self-harm (Slee et al, 2008) was effective, particularly so in the group of participants with a history of sexual abuse.  Mindfulness-based cognitive therapy appears to be particularly useful in preventing relapse in depressed clients with a history of suicidality.

A recent Cochrane review found no clear evidence for the effectiveness of antidepressants, antipsychotics, mood stabilisers, or natural products in preventing repetition of self-harm among those who have already presented with self-harm (Hawton et al, 2015). For children and adolescents, a Cochrane review found no clear evidence of effectiveness for compliance enhancement, individual cognitive behavioural therapy (CBT)-based psychotherapy, home-based family intervention, provision of an emergency card, or group therapy (Hawton et al, 2015). A systematic review on psychosocial treatments for self-harm among adults, reported good effect sizes for cognitive behaviour therapy (CBT) (Hawton et al, 2016). This review also revealed that Dialectical Behaviour Therapy may reduce the frequency of self-harm, however, this involved only a small number of trials.

In line with the UK NICE guidelines for the treatment of depression in primary care, it is recommended that depression treated according to a stepped approach, depending on the severity of the disorder. 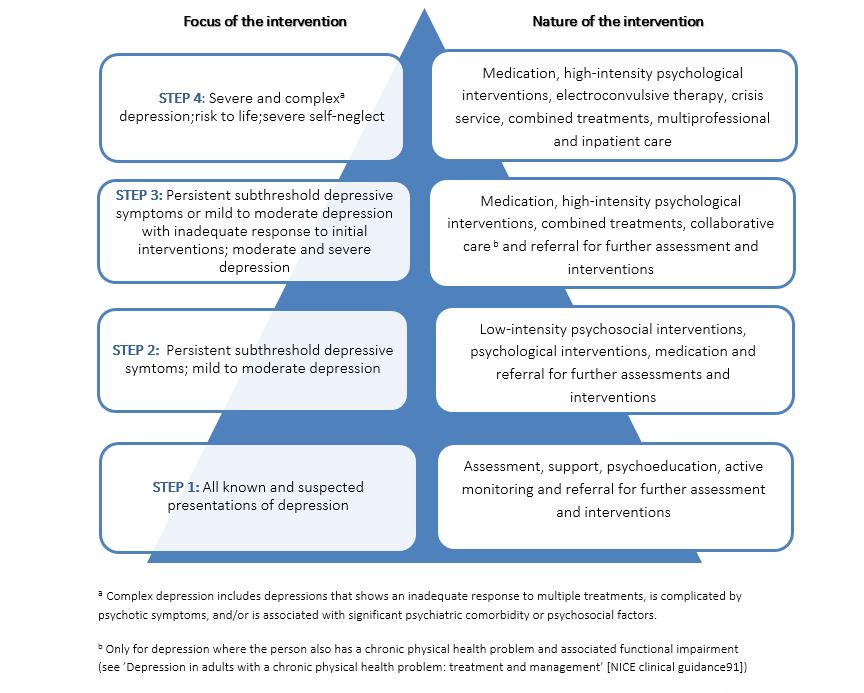 When managing a patient with depression, a GP should educate the patient about the disorder, namely that it is a disorder that is treatable (though it may take a few weeks to see an improvement), that adherence to treatment is important, and that healthy daily habits combined with treatment will lead to improvement in most cases.

When managing a patient with depression, a mental health professional should educate the patient about the disorder, namely that it is a disorder that is treatable (though it may take a few weeks to see an improvement), that adherence to treatment is important, and that healthy daily habits combined with treatment will lead to improvement in most cases.

Patients with depression benefit from psychotherapy. Evidence for efficacy is most consistent for cognitive-behavioural therapy (CBT). CBT usually takes place over six weeks to six months. Patients are helped to identify and challenge cognition’s that maintain depressed mood and to improve the daily balance between stress and duties versus relaxation and enjoyable activities. Other approaches with some evidence for efficacy are interpersonal therapy (IPT) and mindfulness- or acceptance-based therapies. The latter seek to teach clients to avoid self-evaluation and self-judgement based on the content of their thoughts. Person-centred counselling is non-directive and is characterised by an empathetic and supportive approach.

A patient should be referred specialised psychiatric care if they are experiencing delusional (psychotic) depression, severe depression with suicidality, catatonia or negativism, agitation, complicating co-morbidity, bipolar depression, or treatment resistance.

Conversation with a GP: Effective treatments for depression and suicidal behaviour

In the video below Professor Colin Bradley, Head of the Department of General Practice University College Cork, outlines evidence based interventions for people with depression and for people who have engaged in self-harm.